Our history and milestones - MTRS

The MTRS, then known as the Teachers’ Retirement Association, was established as part of Chapter 832 of the Acts of 1913, signed on June 19, 1913. The legislation had a tumultuous history: in 1911, a bill asking for enactment of a teachers’ retirement system failed to pass the Legislature passed a resolve which asked the Board of Education to decide whether such a system would work. In response, the Board presented recommendations with Chapter 832, the bill that created the MTRB, effective July 1, 1914.

Over the past 105 years, the MTRS has seen economic depression and booms, two World Wars, and countless numbers of retirees and active members. The organization has had three names—Massachusetts Teachers’ Retirement “Association,” “Board,” and, finally, “System” (though “Board” remains the term for the Board itself).

Cogswell managed a clerical staff of two and received a yearly stipend of $2,000 for his services.

Clayton L. Lent, Executive Secretary, 1916-1960
When he retired, the MTA wrote that Lent was known as “Mr. Retirement” to thousands of Massachusetts educators because of his long and distinguished career.

Mary Silva, Acting Executive Secretary, 1975-1977
For two years, the system ran solely on the diligence and hard work of its employees. Staff member Mary Silva, a TRB legend with over 40 years of retirement experience, served as Acting Secretary from 1975 to 1977.

Thomas Lussier, Executive Director, 1984-2003
Lussier changed the identity of the agency by expanding its mission: In addition to computing retirement benefits, the MTRB would now reach out to members to educate them on their rights and benefits.

1914
The Teachers’ Retirement Association opens its doors on July 1. The agency is housed at 616 Somerset Street, a few blocks from the State House.

1931
The Teachers’ Retirement Association moves a few doors down to 20 Somerset Street.

1934
The agency moves again, this time to 100 Nashua Street, on a lot that now houses the Nashua Street Jail.

1945
The State Legislature passes Chapter 658, which creates a uniform retirement law for all public employees.

1950s
The office moves to 88 Broad Street, near Rowes Wharf.

1970s
The membership of the Teachers’ Retirement System doubles between 1958 and 1970, but the Commonwealth’s budget does not keep pace. The system struggles in this period. Because of budgetary and staffing constraints, bookkeeping and retirement processing suffers.

1980s
The MTRB begins to turn around. By the start of the decade, some member records are computerized, some retirement functions are automated, and statements are on time.

After several more moves, the MTRB settles at One Ashburton Place, where it stays until 1995.

1984
Thomas Lussier becomes Executive Director. Lussier expands the MTRB’s mission to include education for members, a priority that remains in place today.

1988
The MTRB opens its first Western Regional Office, in Chicopee.

Due to an economic downturn, the Board’s budget is slashed by 15.5%, and staff is reduced by 35%. Governor Dukakis proposes eliminating the MTRB by incorporating it with other agencies.

2001
“RetirementPlus,” which provides an enhanced benefit after 30 years of service—and increases the contribution rate to 11%—takes effect.

2002
The State Treasurer and State Auditor joined our Board.

2006
The MTRB moves to One Charles Park in East Cambridge, and changes its name to the Massachusetts Teachers’ Retirement System.

2007
MTRS membership surpasses the membership of the State Retirement System, and the MTRS becomes the largest of the Commonwealth’s then 105 retirement systems.

2011
Chapter 176 of the Acts of 2011, commonly known as “Pension Reform III,” is passed. Among many changes, the bill increases interest rates for certain types of service purchases, allows some retirees to receive credit for past maternity leaves, and, in order to ensure financial security of the system for future generations, creates a second Membership Tier that provides lesser benefits for new members.

2014
The MTRS celebrates its 100th anniversary.

By a unanimous vote, the Board appoints Erika Glaster as the agency’s ninth Executive Director 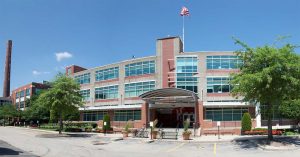 2019
The MTRS proudly celebrates 105 years of service to Massachusetts educators—including our now more than 161,000 active, inactive and retired members and their beneficiaries! As part of our 105th anniversary celebration, we were honored to interview Mary Madden, a 105 year-old MTRS retiree.